In Crystal Reports, a feature called Report Alerts has become more important the last few years. It has to do with the fact that there are at least occasional exceptions to many kinds of report data. “Problems or conditions outside the norm” is a good way to phrase it, and when those happen, we often need to know about them ASAP. Hence Report Alerts.

Creating one isn’t hard—we just have to know three things going in. [a] What to call it, [b] what condition triggers it, [c] what message to show when it kicks in—this last is optional but strongly recommended.

Looking for a low order count is a good example. Having set up a field to count orders per company, we can now set up an alert to see who placed less than, say, thirty orders for the year in question. In the Report menu, we slide to Alerts, then click Create or Modify Alerts. 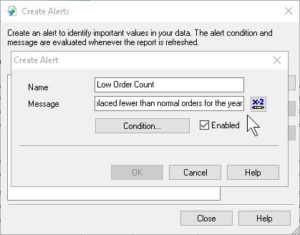 Next thing is to set up the actual alert. We click New on the right side of the box, give the alert a name, and write a user message—some people skip this, but having at least a brief message is important, as you never know who’ll be using the report.

Then, most important, set up the condition which triggers this alert. (Back to our old friend, the Formula Editor.) In our case, we’re looking for suppliers who placed fewer than thirty orders this year, so the formula reflects this.

When done, we OK or Close out of all the boxes, save (desirable), and refresh (F5).  We should see the alert kick in, with the option to let us know which records triggered it. 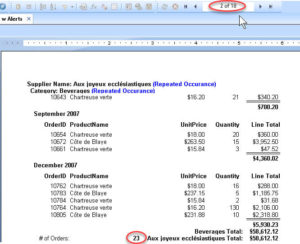 Here we can see the number of records has narrowed down to only eighteen pages’ worth, rather than fifty-nine, and at least one supplier’s data confirms only twenty-three orders (less than thirty). So the alert lets you know something’s different, then allows you to see what the changes are.

As is often the case, the hard part is getting the details clarified. Someone said, “Computers don’t do vague.” It’s a point to bear in mind with Report Alerts.

For further information, check out our Crystal Reports classes.