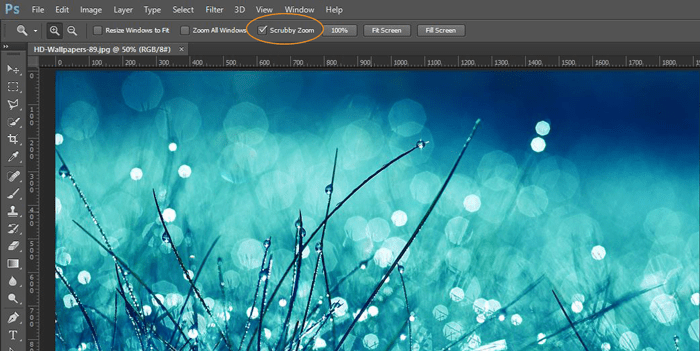 Have you ever opened the latest version of an application and discovered that a new feature was a default setting? This one goes all the way back to 2010 when Adobe released their fifth version of the Creative Suite.

Many applications have some sort of zoom tool. Most of the time it’s a drop-down menu with some size settings, or in the case of graphics programs like Photoshop there is a tool that looks like a magnifying glass.

This zoom tool has worked the same way forever. Select the tool from the tools panel, click on an area of your image and it will zoom in on that area. Click again, it does that same thing. You say you want to zoom back out, just hold down the alt (Windows) or option (Mac) key and a little minus sign shows up by your cursor letting you know the zoom direction has been reversed.

Another usage of the zoom tool would be to draw a marquee around a specific section of your picture to zoom in on that section. That’s where our story changes with the release of Photoshop CS5.

The first time you chose the zoom tool and attempted to draw a marquee around a section of your image you started zooming automatically, almost uncontrollably. After playing around you realize if you drag right, it zooms in, and if you drag left it zooms out. Okay, I get it, but is this the only way it works?

The answer is no, but it is the new default setting and it has a name: Scrubby Zoom. Sounds more like Scrappy Doo’s artistic cousin than a tool setting. It will be active by default if your computer supports OpenGL which is a 2D, 3D rendering API.

If you like it; no harm, no foul. If it’s not your cup of tea you can deactivate it simply by unchecking Scrubby Zoom in the Options bar after selecting the zoom tool.

Five years later it’s still the default setting, and in my case, is still turned off. It’s just not my cup of tea, but you may love it.