How to Create an Action in Adobe Photoshop

An Action is the Photoshop equivalent of a macro in programs like Word and Access. It allows consistent repetition of a sequence of steps. So it’s easier to do the same thing in different files, if one wants. As usual, the thing which helps most is rehearsal—practice a little to avoid frustration when you record the real thing. 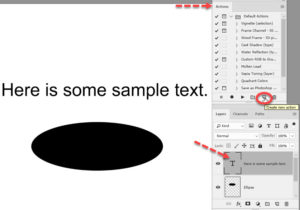 After opening your file and setting up whatever elements we want to affect, we bring up the Actions panel and click the New Action button.

We enter a name, a keyboard shortcut if desired, and a color (optional but sometimes helpful). When we OK out of that box, we record any mouse clicks or keystrokes from there on. 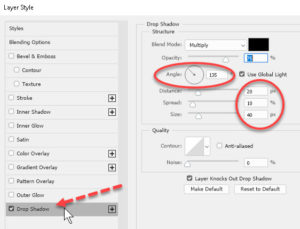 So my double-click of the text layer, making various adjustments to the Drop Shadow after activating, and subsequent OK are all written down as performed. The recorder waits till I OK out to jot down the final numbers. When finished, I click the Stop Recording button (left of Record), and the action is ready.

To apply the same attributes to another item (not necessarily text), I select the layer in question, click the action, and hit the Play button at the bottom of the Actions panel. About the only hard rule on using layer-based actions like this is, they can’t be applied to a Background layer. But that’s a particular of the action I’m recording. A non-layer-specific action can work pretty much anywhere in a file.

One also wants to remember to select or otherwise tell the action what it’s going to work on.

First, in the Actions panel, any step which involves a dialog box has a clickable icon to have it bring the box(es) up during the run, to allow user changes. Which means they can be flexible. 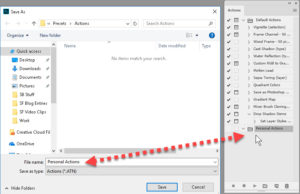 Second, actions can go in folders, and we can save them as separate documents. They can then be opened in other files, or sent to other PShop users, or kept as backups. Portability!

And third, though it’s not a common use for actions, they can apply company colors or fonts to a document. Which means they can be helpful in maintaining product branding standards, if needed.

To learn more about the Adobe programs, check out our Photoshop training here.