In Part 1 we began with a simple classification of the different typefaces used today.

In Part 2 we took a simple look at some of the basic character components.

In Part 3 we want to make the users of Adobe products aware of a wonderful service that is available through the Creative Cloud.

Back in 2009 Jeff Veen, Bryan Mason, Ryan Carver, and Greg Veen, all originally part of the Measure Map/Google Analytics team began a company called Small Batch, Inc. Its purpose was to make font usage on the web far more accessible by introducing a product called Typekit.

Designers had been painfully aware of the limitations associated with font usage online since the webs beginning. At best there were about 14 fonts most designers could count on being installed on the average user’s computer. Did you think everyone was really that crazy about Times New Roman, Arial, or Verdana?

Their product “lets us to host both free and commercial fonts in a way that is incredibly fast, smoothes out differences in how browsers handle type, and offers the level of protection that type designers need without resorting to annoying and ineffective DRM,” wrote Veen. This new freedom simply by adding a line of JavaScript to each web page using a different font.

The success of Typekit did not go unnoticed, and at the 2011 MAX conference Adobe CTO Kevin Lynch announced that Typekit had been acquired. “Typekit now serves nearly three billion fonts per month on over one million different sites, including some of the most recognized brands on the web. We host the iconic typefaces of the New York Times, Vanity Fair, and the New Yorker, among others. We’re forging new ground with web-native companies like Zynga, Twitter, and the Gawker Network. And we’re making web fonts available to as broad an audience as possible, offering integration with platforms like About.me, WordPress.com, Posterous, and Behance.” Adobe Typekit Blog, October 2011

This same product is now a part of Adobe’s Creative Cloud Service. Fonts may be accessed through the Creative Cloud app or directly within many of the CC applications (see images below). Open a document in InDesign that is missing a font available through Typekit and the application automatically offers you the option to sync with Typekit. You see, Typekit isn’t just for the web any more. Many of the fonts are licensed for print as well as online usage.

Typekit is only one of several new services Adobe is offering through the Creative Cloud. You should check it out! 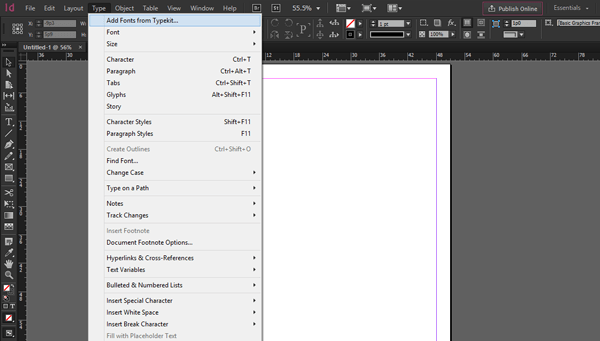