Sometimes it’s the little things that make all the difference. Tip 1: We’ve all used the ever popular Save As to prevent messing up a photograph and not being able to go back afterward and edit out our changes. A much simpler approach to work …

One consideration most designers go through when creating content for today’s web is; should my stylesheet begin with a reset? The variety of reset options used today is fodder for a completely different discussion, but there is a subtopic I’d like to pursue. Oftentimes a …

In Part 1 we began with a simple classification of the different typefaces used today.

In Part 2 we took a simple look at some of the basic character components.

In Part 3 we want to make the users of Adobe products aware of a wonderful service that is available through the Creative Cloud.

Back in 2009 Jeff Veen, Bryan Mason, Ryan Carver, and Greg Veen, all originally part of the Measure Map/Google Analytics team began a company called Small Batch, Inc. Its purpose was to make font usage on the web far more accessible by introducing a product called Typekit.

Designers had been painfully aware of the limitations associated with font usage online since the webs beginning. At best there were about 14 fonts most designers could count on being installed on the average user’s computer. Did you think everyone was really that crazy about Times New Roman, Arial, or Verdana?

In Part 1 we began with a simple classification of the different typefaces used today. We kept things simple and broke them down into 5 different groups; serif, sans-serif, monospace, handwritten, and decorative. In Part 2 we will take a simple look at some of …

This will be our initial look into the world of text. All those letters that we string together to form books, online articles, blog posts, and the like.

Most mere mortals pay little attention to the how and why of assembling all those words into a form worthy of consumption.

“Typography is to literature as musical performance is to composition: an essential act of interpretation, full of endless opportunities for insight or obtuseness.” ― Robert Bringhurst, The Elements of Typographic Style

This series will begin with a simple classification of the different typefaces used today. To keep things simple I, and many others, have chosen to break them down into 5 different groups; serif, sans-serif, monospace, handwritten, and decorative. 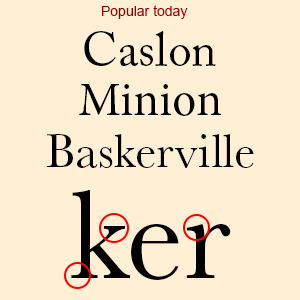 Adobe Photoshop CC, Dreamweaver CC and InDesign CC are part of Creative Cloud™. In our free webinar series, you will learn some of new features in each of these products. You’ll also learn how Creative Cloud enables you to have access to all the latest …