How to Use Duotone Mode in Photoshop

One of the least-known color modes in Photoshop, or certainly lesser-known today, is Duotone. This may be partly because it requires converting a file to grayscale first, which means that for color images the very name is unavailable on the menu. But it has a couple of interesting properties. 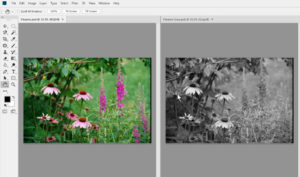 The first thing, as I mentioned, is to take an image and convert to grayscale; from there, one can go to Duotone mode. And then, as the one chap said in the movies, the fun begins. Duotone mode allows the user to “tint” the image with between one and four ink colors, rather like “dunking” the image in a dye bath. So what? you might ask. 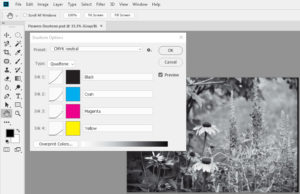 Although one might want to do brightness and contrast adjustment beforehand, Duotone mode allows some artistic things to happen to an image. For one, it’s possible to print a grayscale-like picture in the four-color process. The max number of colors one can use is four; they can be cyan, magenta, yellow, and black—CMYK. They make the grayscale-like image a little warmer or cooler by tweaking the balance of the colors in the dialog box.

For another, it’s capable of closely simulating a couple of older photographic printing processes which were very beautiful and elegant back in the day. Some illustrated novels, even graphic novels, occasionally still use these kinds of repro art styles. 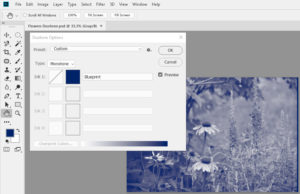 One, called cyanotype, was used till fairly recently. It could do photo printing, AND create traditional-style blueprints for building and manufacturing. (The chemicals involved, ferric ammonium citrate and potassium ferricyanide, are both rather nasty. Being able to create the appearance without poisoning oneself is certainly a plus!) Even the sub-mode called Monotone can handle this one.

Another, perhaps one of the most beautiful, is sepia toning. A print gets a bath which includes sepia ink (from the marine animal called the cuttlefish). It stabilizes the image chemically, and gives it the lovely golden-brown tint we associate with antique photographs. Sepia toning helped prevent fading. It also gave the image a warmth a normal silver print would sometimes lack due to its regular color. Duotone mode with all four inks (Quadtone) makes this version easy.

Some newer users of Photoshop love playing with the ability to bend reality—which is cool. But there are a lot more capabilities in the program. Using it to reproduce some of the beauty of yesteryear doesn’t hurt.

To learn this and much more, try our Photoshop classes.