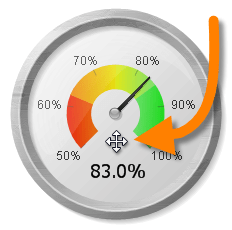 When you see the white, four-pointed arrow, that’s your cue to click and hold your left mouse button and move with wild abandon.